“Valiant for the Truth” Series 12 Set

1) The Canon – Who decided which books were “inspired” and which were not? When and where did this decision take place? The canon of Scripture is examined and books laying claim to inspiration are revealed and refuted.

2) The Greek Text – Before there can be a translation there must be a Greek text to translate from. This lesson enlightens the student on the work of men like Valla, Erasmus, Stephanus, the Elzivers and Theodore Beza. The contributions on Jerome, Gutenberg, and the Complutensian Polygot are also examined and evaluated.

3) The Translations – In this lesson the student will learn more about the English translations before 1611. The work of Wycliffe, Tyndale, Coverdale, and others is examined. There is also a thorough biography of the translators of the King James Bible and a breakdown of the six companies they worked in.

4) The Combatants – Are King James Bible believers “church splitters,” “Bible worshippers,” heretics or cultists? They are certainly called these things and worse by their name calling adversaries. Each of these false charges are refuted and the real culprits revealed. Also examined is the Oxford Movement which was used by Romanists to bring down the Anglican Church. Its methods are alive today in our churches.

5) Westcott & Hort – The names are famous but the men themselves are a mystery. Now evidence of what they truly believed is revealed.

6) Inspiration – What is “inspiration?” That question is not as easy to answer as you may think. Do you know what the six theories of inspiration are? Do you know how to handle passages that do not fit your description of inspiration? You will after taking this lesson. Also answered here is the question of which is better, the original or the translation? Rather than jump to conclusions the student is taught the importance of turning to the Bible for his authority. The importance of preservation is also examined and the glaring mistranslation of Psalm 12:6,7 in the New International Version is examined.

8) Verses Changed & Version Comparisons – Over 400 verses are examined and compared in the lesson. The problems with modern versions are shown to be more than doctrinal.

9) Interesting Facts From the King James Bible – Here is a unique study which discloses some amazing and unexplainable facts found in the Authorized Version.

10) How to Fight the Battle – What is “right” to do and what is “wrong” to do in the battle for the Bible? How should a young Bible believer deal with adversaries of the King James Bible? How should he deal with pastors and teachers who do not accept the teaching that God has a perfect Bible? Is it an issue worth fighting for at all?

11) Why Do They Do It? – Why do men who know better still turn from the King James Bible and promote inferior modern versions? That question and more are answered in this lesson.

12) Beyond the Average – There is more than a young Bible believer can do for the cause of God’s perfect Bible. But it requires an amount of sacrifice in the form of time and effort that few are willing to give. Yet the results of such sacrifice can be phenomenal!

There are no reviews yet. 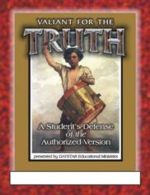